Thermal Imaging on Drones and Its Benefits

Drones or the unmanned aerial vehicles are aircrafts that are not operated by onboard pilots, and are controlled by automatic devices or pilots on the ground. They are used for a number of purposes and missions.

What is meant by Thermal Imaging on Drones?

These drones are then launched and sent to the area that needs to be examined using thermography. The minute thermographic cameras in the drones come in action; they begin analyzing the area under study. The thermograms produced by these cameras are recorded and can be viewed by the person controlling the drone. He can easily identify the object he is interested in by seeing the radiation emitted by that body. As the temperature of a certain object rises, it emits more radiation. By analyzing the radiations and the color produced by them, the controller is able to locate the entity he seeks.

What are the Benefits of Thermal Imaging on Drones? 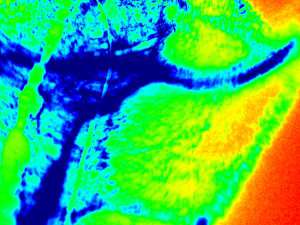 Thermographic cameras in drones have several benefits. Firstly, this technique helps in examining inaccessible areas. Lots of areas cannot be accessed by people or other objects. On the other hand, drones can easily enter areas of minute sizes because of their small size. This makes it quite convenient for different people or companies to get thermal images of complicated areas.

Secondly, before the creation of this technique, sky workers holding thermographic equipment or thermographic cameras on tripod stands were used to examine an area thermographically. Both these methods were laborious as well as inconvenient. As drones can easily become airborne and can stay in the air for as long as forty hours, this technique is extremely effective.

Thirdly, thermal imaging on drone helps in saving time. You can use UAVS at any time of the day you want, and can get results very quickly. This saves a lot of time that can otherwise be utilized for completing other important tasks related to a mission.

As thermal imaging on drones offers all these benefits, it is becoming quite common. Individuals, multinationals, government agencies and military organizations are using this method for carrying out numerous important projects.